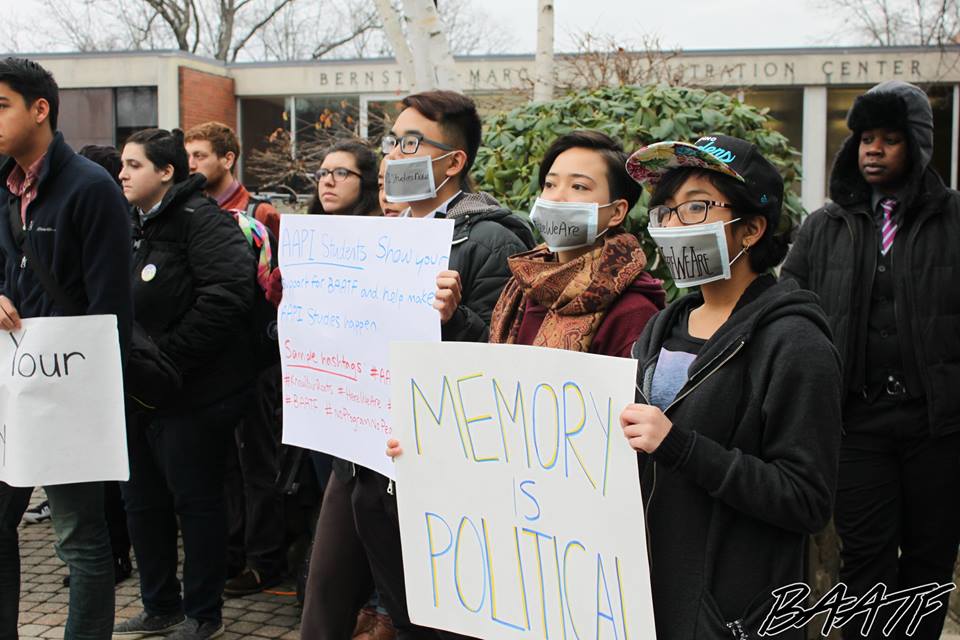 Over the past few months, there has been a lot of pain, loss, tension, defensiveness, apologism, defaulting to those dominant hierarchies and norms in the Asian American/Pacific Islander (APA, APIA, AAPI, used interchangeably here) world—whether consciously or not. We heard different voices, including from those naming themselves or their organizations as representative of the entire or specific APA communities, those who have tried to push out the boundaries of that invisible/hyperinvisible Oriental box we exist in and those who think they are saying something fresh, but falling into another American race trap.

I am tired of the lack of nuance in what can only be a nuanced conversation on race. I will not promote the frame of “Asian privilege” in a national conversation. No such thing exists upon breaking down what Asian is, what it looks like, its history. To name and call out Asian privilege renders invisible the experience of the most invisible Asians, undermines economic justice, denies the daily reality of APAs at the intersections, and is another expression of the oppression Olympics game, you know, the one where we all lose (except the people who are already winning). Soya Jung said it eloquently on this very blog:

Asian Americans are frequently confronted with nuance. We are at once racialized as terrorists, spelling bee champions, criminals, tech geniuses, master cellists, sexual fetishes, dangerous interlopers, and robotic wage slaves. We are widely cited as drivers of demographic change, but there are real divisions among us – of class, religion, immigration status, color, gender, sexuality, language, and political histories. In aggregate, we are a little bit of many things. That makes building unity difficult. Those divisions have been exacerbated over time by western influence through war, colonization, selective immigration policy, and the making of the model minority myth. In response, as activists we are forced to think deeply, as all organizers must, about where there are common interests across those divides and with other communities.

APA history and racial reality is broad in the ways it is fractured, obscured and distorted. And, thus, how our consciousness around this fallacious racial identifier, “Asian”, that has been ascribed to us, might be similarly fractured, obscured and distorted. The “Asian privilege” frame and its often apologist messages doesn’t successfully break open the black-white binary that we are bound by as non-black people of color and non-whites (and those who are mixed or have different diasporic trajectories and histories) beyond racial triangulation, describing only a segment of the millions of people who fall under the moniker “Asian.” It can also create harm in cultivation of meaningful conversations around issues that affect all people of color: intersectionality, immigrant rights and citizenship, reproductive justice, environmental justice and all the other staggeringly big issues that require unity and shared political consciousness.

And then there’s the impact on the Asian American psyche. Internalized racism via depoliticization, cultural genocide via whitewashing and assimilation, the model minority myth and objectification/ fetishization denies the collective reality of so many APIAs:  street harassment, hate crimes, detention, poverty, discrimination, lack of access to services and other state and interpersonal violence, what else can happen but the ultimate cognitive dissonance? Is there a connection between this cognitive dissonance and our high rates of suicide, mental illness, alcoholism, survivorship of domestic violence and sexual assault?

One of my favorite quotations is from Albert Einstein: “No problem can be solved from the same level of consciousness that created it.” If we accept that our consciousness—until interrupted by  the process of politicization—is formed by the norms, hierarchies and standards of the dominant culture, Audre Lorde’s famous quotation follows a similar logic: “The master’s tools will never dismantle the master’s house.”

Which among our diverse experiences and positions in the world aren’t getting airtime, aren’t in our consciousness? Whose experiences are being forgotten, neglected or ignored that could be shaping the narratives, structures and tools by which we experience Asianness and resist external and internal oppression? How do we incorporate those shadow realities from the backrooms, interstices and intersections of our racial history in the U.S.? How will we awaken the more privileged/ white-assimilated/ captured among us to build Asian political identity, cohesion, social/ cultural/ political power and true solidarity with other people of color and across the class strata? How do we understand and talk about anti-Asian racism and our racial realities without engaging in or conflating it with anti-blackness?

I’m launching a personal project this APA Heritage Month to make our “messy house”  even messier—in the hopes of forging forward. Look out for pieces on APIAs on growing up in other communities of color, non-white assimilation (versus cultural appropriation), sex work, addiction and suicide, non-U.S.-born Asian diaspora, the race of typography, APIAs and 420, and more random shit. Tweet or DM me about the faces and places of Asian America you don’t hear about but want to, including your own story.