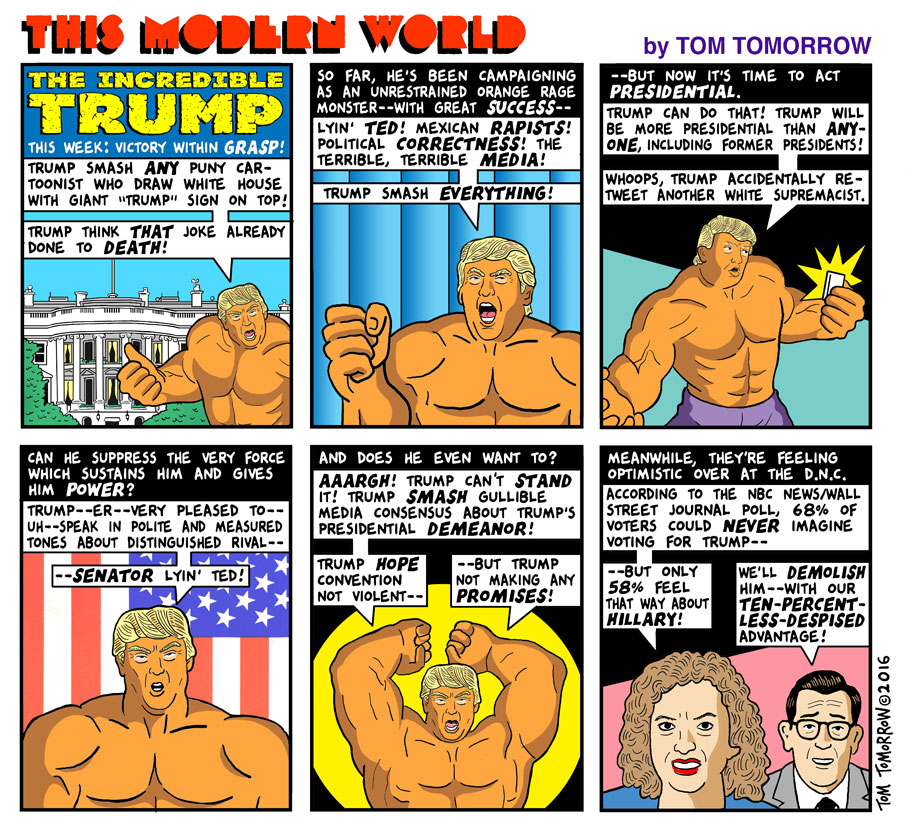 Nate Silver’s findings regarding the median incomes of Trump supporters are worth taking a look at as what he has found busts the frankly offensive stereotype of the Trump supporter as a working class rube.

When trying to defeat a bigot, one would do best not to fall prey to bigotry. Doing so just polarizes an already dangerously polarized situation, and all while failing to address what may, in fact, be one of the most important bits of knowledge necessary to effectively fight the right: in order to beat right wing movements, you have to separate the leaders from their bases of support, and that means competing with those leaders for the loyalty of those to whom they’re appealing.

In order to do that, we need to know who the followers of people like Trump and Cruz, who I’m not letting off the hook as an extreme and dangerous right winger, are in fact, and not just in our imaginations.

Here’s what I mean. It appears that the median income of a Trump voter is much higher than for the country as a whole, and higher than the median income of Clinton and Sanders voters. Interesting. Also interesting that incomes of voters supporting all the main stage candidates of both parties are so much higher than the national median. This seems to indicate, at least to me, that the candidates are, as usual, not actually appealing to those who suffer most in an unjust economy, but to the anxiety of the rest of us (who, by the way, turn out to vote at higher rates) that we will soon join them (and the fear of having to pay for the social programs they require).

The Trump/Cruz base voter profile in particular is telling as both men lean in the general direction of fascistic. Their fascistic tendencies, even if they themselves may not, in fact, be fascists, are signaled not just by their hyper-nationalism, bigotry, and misogyny, but by their appeals to what Hannah Arendt described as “the failure to think,” an act that, in the context of modern politics, always opens the door to totalitarianism.

The higher incomes of voters for both men mirrors a phenomenon of the neo-Nazi movement of the late 80s. While media makers were describing neo-Nazi skinheads as a working class movement, the average neo-Nazi youth activists actually came from families with higher incomes than the national average of the time, and a significant portion of them came from middle class burbs. What animated that movement wasn’t poverty, but precarity, and the false but widely held perception that a rise in rights and opportunity for Blacks was the reason for the eroding status of middle class whites in that era. Do I hear an echo?

The same can be said of members of the White Citizens Councils and the KKK of past generations. They infiltrated Southern state governments and chambers of commerce at every level because they were already there. I’m near certain we would find this to be true today of members of the armed and dangerous white nationalist paramilitary groups that are growing in power and influence in the rural West, one cluster of which famously donned cowboy hats and took over and occupied the Malheur National Wildlife Refuge in Oregon in order to make the case for privatizing all of our public lands.

In each case, these right wing faux populists play the role of champion of the working class, with Trump talking about coal miners and others who are suffering in this economy when they are only a minority of the workforce in Appalachia and the Desert-Mountain West, and the paramilitaries talking about ranchers and cowboys in communities where most of the workforce are government and service sector employees. Such was the case in Oregon where the Bundy militia occupied a federally funded wildlife refuge in order to champion ranchers, while most of the revenue flowing through Burns, the community where the wildlife refuge is based, comes from wildlife refuge-related tourism and the incomes of government employees who constitute the largest group of workers in the city and county in question.

But the overwhelming support among GOP primary voters for Trump is particularly telling. If Trump were trying to actually address the working class, he’d be talking about service sector workers and others in the low-wage, part-time, and contingent workforce, not just coal miners. Rightists like him (and sometimes leftists) talk about elites of the working class in a two-faced play for votes. On the one hand, they talk about ranchers and miners because they have powerful symbolic meaning outside of their own ranks. Miners, like timber workers and ranchers, appeal to (mostly) white nostalgia for a rose colored past in which they’ve imagined away the role of government in aggressively investing in building the white middle class, and attribute the prosperity of past generations of white workers to their moral fiber (and, implicitly, segregation, immigration bans, etc.). Trump manages to look folksy by hiding behind a fake concern for these blue collar icons, even as he fully intends to hose them once in office. Trump isn’t a champion of miners, he’s a champion of fossil fuel companies.

The evangelical right wing used to be the master of this. In the early 90s, they accused the LGBTQ community of “hijacking the freedom train and taking it from Selma to Sodom.” They faked the act of appealing to Black voters by talking about how LGBTQ activists were despoiling the dignity and grace of the Civil Rights Movement, but their real audience was race-sensitive, conservative whites.

Evangelical leaders reinterpreted civil rights to be “special rights” bestowed only on those with fundamentalist Christian morals in order harden the resolve of their almost entirely non-black and fundamentalist Christian base, while simultaneously giving them cover to attack the Bill of Rights in general. The ultimate goal was not to protect the dignity of Black voters, but to roll us back to the “original construction and intent of the Constitution,” a document that originally excluded women from full citizenship and justified race slavery with explicit intent. They weren’t appealing to blacks, they were appealing to the magical negro that lives in the imaginations of conservative race-sensitive whites.

We need to get real about who really constitutes the current and projected base for right wing extremism. They aren’t mainly poor folk. Real poor folks are, or at least should be, the current and immediate projected base of support of movements for racial and social justice. They include undocumented immigrants and part-time and contingent workers, people in prison, a significant portion of whom were arrested while unemployed or underemployed, domestic workers, and service sector employees. In each of these sectors, people of color are over-represented, but in each, race is by no means the only characteristic defining our experiences of injustice. Those of us who confine our understanding of racial injustice to individual acts of bigotry need to break out of that box and start acting like it.

The traditional base of support for the right are those with relative privilege, living in the anxiety of losing that privilege in a society that punishes the poor. White privilege is eroding. We need to acknowledge this reality.  If we don’t, we will become the victims of white nostalgia, trading rose colored pictures of a romanticized past for a sustainable, fair, and secure economic future.

Roy McVeigh’s 2009 book The Rise of the Ku Klux Klan discovered much the same trend in early twentieth-century right-wing movements in the U.S. Klan membership was largely middle-class and concentrated in areas without a great deal of racial diversity.

I love a good book recommendation:) Thanks!

Thanks to the history of royal families and aristocracies, many countries in Europe have active discussions about classism alongside racism.

In fact, countries like the UK are often said to have bigger problems with classism than with racism, or often talk about race along class lines (such as, the problems with the Muslim and Black community are a class issue, than a race issue, because most immigrants from Africa and Pakistan have issues climbing out of the lower class due to their culture).

The United States still has liberals who attack using class, while in Europe this would alienate liberal voters.

[…] gospel of white nativism and appealing to an audience of people falsely assumed to be, as Scot Nakagawa says, ignorant, working-class rubes. In fact, they seem to be white people with higher median incomes […]

[…] gospel of white nativism and appealing to an assembly of people secretly insincere to be, as Scot Nakagawa says, ignorant, working-class rubes. In fact, they seem to be white people with aloft median incomes who […]