“[S]mall, weak, submissive and erotically alluring…eyes almond-shaped for mystery, black for suffering, wide-spaced for innocence, high cheekbones swelling like bruises, cherry lips…. When you get home from another hard day on the planet, she comes into existence, removes your clothes, bathes you and walks naked on your back to relax you … She’s fun you see, and so uncomplicated. She doesn’t go to assertiveness-training classes, insist on being treated like a person, fret about career moves, wield her orgasm as a non-negotiable demand…. She’s there when you need shore leave from those angry feminist seas. She’s a handy victim of love or a symbol of the rape of third world nations, a real trouper.” — Tony Rivers, “Oriental Girls”, Gentleman’s Quarterly (1990)

Next month, Miss Saigon will open in Saint Paul, Minnesota at the Ordway Theater. On the 25th anniversary of its original release, the play just broke the box office in London. The Guardian reports: “By tea time on Monday, the first day of sales, £4.4m had been taken at the box office.” I had to Google this, but £4.4m is $6,903,160. The producer is “flummoxed,” which in translation would be exactly my reaction: What the f*ck.

I’m glad that Minnesota Public Radio did the segment it did last week, interviewing Asian American activists who plan on protesting the opening of the show who speak to the sexual violence that APIA women have to deal with as a result of centuries of (mis)representation as submissive, desperate, sexually available and disposable characters in the White male supremacist imagination, dating way back to Marco Polo and as recently as Day Above Ground with their music video Asian Girlz.

Sadly, quotations from Patricia Mitchell, President and CEO of the Ordway, and Manna Nichols, a Chinese American actor who is playing the tragic female lead, are not even half-excuses. Mitchell’s reaction is basically a shrug and an “Oh wells, it’s art and it sells.” Nichols says “It’s actually incredibly historically accurate compared to most musicals.” Obviously my understanding of the word “accurate” is different from hers. 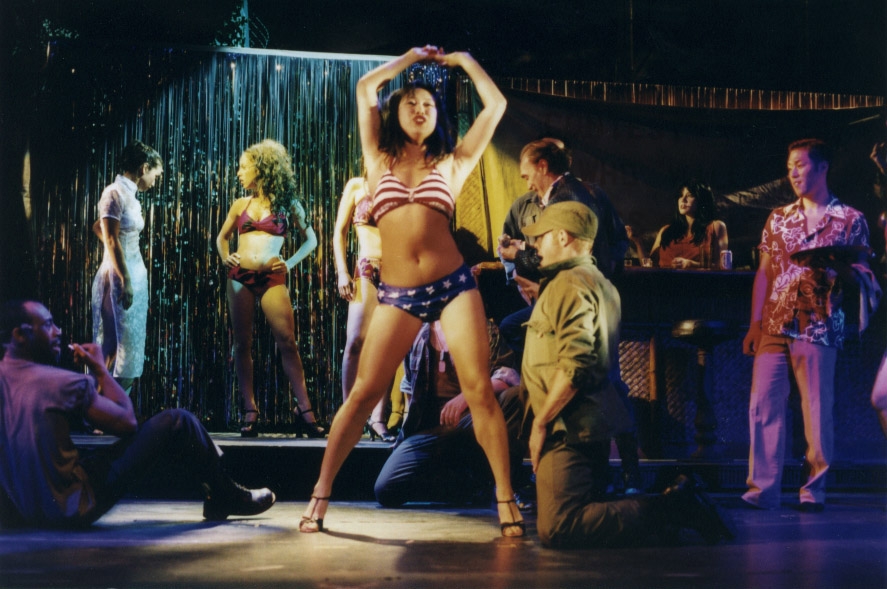 The stuff that I’m talking about that would make Miss Saigon (including the dozens of simultaneous productions of it that occur all around the U.S.A. and Europe at any given time) actually accurate would be the following monstrous facts about the U.S. military in Asia:

I’m not even getting to war brides, adoptees, Operation Babylift, Jonathan Pryce in yellowface in Cameron Macintosh’s original Miss Saigon, which he tells The Guardian is “now looked back on as a musical that probably gave more opportunities and employment for Asian actors and performers than any other show in history.” Once again, what the f*ck is all I have to say.

Jonathan  Pryce explaining how he became Asian in Miss Saigon

*I detest the continued use of the term “comfort women” to describe the estimated 200,000 women and girls as young as 12 years old who were raped over the course of Japan’s occupations throughout Asia. This summer, I heard Ok Sun Lee, one of the few remaining survivors, now in her eighties, speak at Queensborough Community College. She rejected the term herself, particularly as she recounted escaping from a rape camp at 14 years old in China only to be caught and be stabbed through the foot to prevent future attempts.

(Note: For a great analysis of Miss Saigon, check out Chapter 2 of The Hypersexuality of Race: Performing Asian/American Women on Screen and Scene, by Celine Parreñas Shimizu)

5 replies on “Meet Miss Saigon, Not the Box Office Kind”

[…] of the Don’t Buy Miss Saigon Coalition are using Facebook, Twitter and Tumblr, as well as various websitesand blogs, to spread the message that the Broadway musical is racist and […]

[…] of the Don’t Buy Miss Saigon Coalition are using Facebook, Twitter and Tumblr, as well as various websitesand blogs, to spread the message that the Broadway musical is racist and […]

[…] of the Don’t Buy Miss Saigon Coalition are using Facebook, Twitter and Tumblr, as well as various websites and blogs, to spread the message that the Broadway musical is racist and […]

The photo of the guy at the bottom is Jonathan Pryce.