Julie Chen’s recent admission that she had double eyelid plastic surgery to make her look less Asian, or, in the words of a former boss of hers in her days as a newscaster in Dayton, Ohio circa 1995ish, “less disinterested and bored,” came as no surprise. In an industry in which bi-racial Ann Curry is dumped from the co-anchor post at the Today Show for not being “relatable” enough, a little anti-Asian surgery may be the equivalent of broadcasting training for Asian women. Kind of a prerequisite for the job.

Apparently she succumbed to pressures from a big-time agent who refused to represent her unless she made herself look more American. I’ll admit, that “American” thing was my flourish, but I think we all know what the subtext is when someone asks an Asian woman to change the shape of her eyes or nose, or when an African American woman is told to straighten her hair or wear foundation a shade lighter than her natural skin color in order to make them more “relatable.” They really mean more like that all-American girl next door who happens to be white.

Check out the before and after. 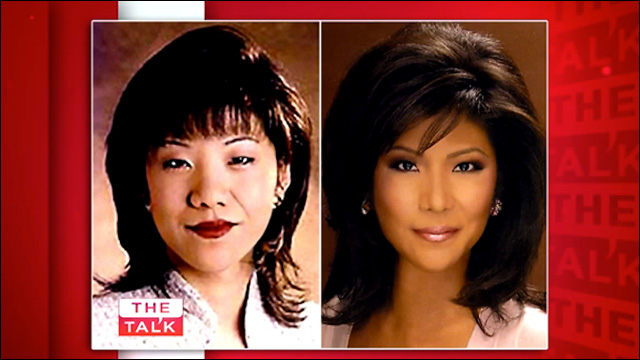 Kind of makes me wish you could reverse the images and just change her back. Not that she’s not perfectly fine the way she is now. But, just what the hell was wrong with her before? I guess we can take some satisfaction in knowing that Chen’s former boss and her agent were telling the current wife of entertainment industry mogul and former CBS president Les Moonves to fix her face with surgery in order to get their approval. Let’s hope they’re laying low.

This story reminds me of my childhood in the 1970s when some of my female cousins would change the shape of their eyes with tape. That’s right. They cut clear scotch tape into little eye fold shaped slits and stuck them onto their eye lids, causing a fold to form that mimics a more “western” look. Then they would pile make-up on the tape so that you couldn’t see the plastic. It was before the popularity of current surgical options, so they just McGiver-ed their own solution.

Those cousins envied my sisters and I for having eyes that looked less “Asian” than theirs. Lately, age has caused my lids to sag a bit, causing my eyes to go in the reverse Chen direction (see the before picture above) and I have to admit, I see myself turning more Asian looking by the day. But, in my case, I like the change. I recommend a double brain lobe surgery for anyone who doesn’t.

Later in the 70s, some Asian girls I knew had eye-lid surgery in order to make them look “American.” They actually used that word. Those same girls often had pictures of Cheryl Tiegs cut from magazines and pasted on their mirrors, so I’m guessing that was the general direction of their aesthetic preferences. Given that preference, the eye lid surgery was the East Asian version of skin bleaching among some Indian girls nowadays who hope to attain a “beautiful” though sometimes toxic complexion.

In case you were wondering, the problem with those eye lid procedures is that the fold is really a scar. For a while afterward, a scar is exactly what those folds look like unless you cover them up with make-up. Once the scars fade, some of those surgeries fail, with the scar tissue growing too soft to maintain the fold, sometimes on only one eye.

These surgeries are just one of many ways that plastic surgeons profit from racist standards of beauty that start with European when determining what’s “pretty.” Sadly, many European ethnic women don’t fit those standards either, with all kinds of fall out including epidemics of bulimia and anorexia.

In the end, these surgical “fixes” served not just to make the girls I grew up with who had them look more western, they also served to make them look rich. The surgery was a status symbol. If you could afford it, part of the “pretty” you bought was about class and not just about race. This same phenomena is reflected in the plague of South Korean women having this same kind of surgery today. Of course, having the surgery would leave you poorer, not richer. Same thing is true of buying that Porsche you may have been eyeing.

But, eye lid surgery of Asian American women and the spread in popularity of the surgery in places like Japan and South Korea are far more than indications of status or attempts at western “beauty.” They are marks of the degree of our colonization.

It appears that her nose has also been “westernized” in the process of making her face more “relatable.” I always feel that these skin cutting and coloring issues are some of the most visible evidence of the insidious nature of colonialism. Not only to we break our banks to afford these kinds of body modifications but the sharpest scalpels are the ones left behind in our bodies by the colonizers a condition known as “internalized oppression.” Why would the colonizer bother to do what we can now do ourselves? Disappear any evidence of our beauty, existence and relevance to the modern world through self-loathing acts of shape shifting. Grrrrrr!

There’s a book called “Pretties” which is set in the future where everyone has plastic surgery once they reach a certain age. The book is aimed at teens and has good reviews on Amazon. I started reading it but I couldn’t get into it enough to finish it.

There is a guy who sued his wife because their baby didn’t look like either one of them and he thought she cheated.

He also said the baby was ugly – which is a jacked up thing to say and babies faces change a LOT as they grow up.

The mom confessed to having all kinds of plastic surgery and the dad won the law suit.

That is amazing. WTF!

I’ve also noticed a new trend of colored contacts. I’m still deciding how I feel about that. I know I’m not a fan of blond hair on Asians, Africans and Latinos.

In the U.S. it seems to be standard for everyone to get braces – unless they already have perfect teeth.

I’m trying to decide if an eye lid surgery is “Anti-Asian” or “Anti-What God Gave Me” or “Anti-Nature”.

I suppose if you asked a plastic surgeon, they would say that they are not being racist – they are sculpting what the culture (racist may it be) has decided is beautiful.

Thank you for this! I have been reading your blog and feel empowered by each new article. My heart broke as I read the initial news reports about Chen because, as a Korean American who grew up in Boise, ID, I was willing to do just about anything to be accepted/fit in. I cried my eyes out when my mom refused to buy me the specially shaped tape strips for my eyelids and I began to understand that we would never be able to afford surgery. Now, as an adult, I am so thankful that my mother did not allow me to go through the painful, unnecessary procedures but still admit how painful that was growing up. The pressure to “be American” can be suffocating.

Scott, you know in Hawaii this procedure is very common, and not just for cosmetic reasons, but droopy lids blocking vision reasons that are covered health insurance. So when I read about Julie Chen’s admission … why all the harsh criticism? Christie Brinkley (age 59) and her daughter Alexis went under knife at the same time a few years back, but the media seems to attribute her youthful looks on diet and exercise! Also, look at Beyonce over the years, she certainly has lightened up in appearance. Julie Chen chose a profession in the public eye in a society that places a premium on youthful good looks for women. I know if her after picture didn’t have the smoky eye make up you’d probably see the difference in eye shape is more subtle. This procedure was done almost 20 years ago, and yet the public gets outraged by it now. The woman had a bit of eye surgery, she’s not an axe murder!

I don’t think I suggested that Julie Chen is an axe murderer. I also think I said pretty clearly that she looks just fine now. If she enjoys the way she looks, I’m not holding that against her. I’m not holding it against anyone if they want to alter their appearance through the use of cosmetics, plastic surgery, or by pretty much any other means. As far as I’m concerned, plastic surgery is a self-inflicted wound, and well within the right of each person to opt for in a society that respects our sovereignty over our own bodies (which, sadly, isn’t the one we live in but I do believe in the power of living “as if”as part of an overall effort to make positive changes). What I think I was critiquing was the pressure that we put people under to look a certain way, especially when that way puts nationality and race at the center of our ideas about beauty and our ability to relate to other people. When news director’s start imposing standards of appearance on people that say we need to change the way we look (as dictated by phenotype) in order for people to be able to relate to us instead of presenting diverse images to people that challenge how narrowly they define what they can relate to, I say that’s worthy of criticism. But if Julie Chen wants to go blonde, wear blue contacts, and change her name to Moonves, that’s up to her and anyone who says otherwise has got this script twisted. Oh, and Christie Brinkley’s plastic surgery as well as her daughter’s? Sad examples of how beauty and ethnicity are tied together, not to mention beauty and youth.