First year in college? Back to campus? If you haven’t registered for Asian American Studies here are 3 reasons why you need to NOW.

They went back to campus, but they didn’t go to class. Instead, students at San Francisco State went on strike for five months, the longest academic student strike in American higher education history, and shut down their university. Their peaceful protests for the admission of a greater number of minority students, an education that reflected their families’ and ancestors’ histories and experiences, as well as more community control of their education, were met with violent police repression. Yet they stood their ground. led by a multiracial coalition, the Third World Liberation Front, would lead to the establishment of Ethnic Studies, including Asian American Studies, on that campus. Students on college and university campuses across the state of California, inspired by their peers at San Francisco State, followed suit soon after. Years later, students on campuses beyond California would be inspired to do the same. On those campuses where Asian American students were brave enough to stand up to their college and university administrations, Asian American studies programs and departments were formed.

These stereotypes are meant to uphold the white supremacist, profit-driven society we may not always like to admit is the society we live in. For example, Asian Americans were the first immigrant group to be considered “illegals.” It was thought that we threatened (whites’) jobs and posed a cultural threat to American society because we could never assimilate. Sound familiar? These ideas were used to justify the labor exploitation and residential segregation of Asian immigrants from the late nineteenth century to the mid-twentieth century. More recently, with increasing immigration from Latin America, these ideas have been retooled and used against Latinos. Meanwhile, as the United States faced international criticism for Jim Crow racism during the Cold War, and as the civil rights movement gained momentum in the late 1960s, the negative stereotype of Asians was reversed. Asian Americans all of a sudden became a “model minority.” The successes of a few were used to undermine anti-racist struggles being led by African Americans across the country. If Asians could thrive in American society despite experiences of racial discrimination, according to the “model minority” myth, then all racial minorities can thrive. Why change the system? This false logic, however, masks the deeper social structures that reproduce a veritable caste system in what is supposed to be a democracy. Asian American studies provides us with this historical perspective and challenges us to look beyond a present-ist perspective (i.e. a perspective that is only focused on the present, the now, the instant and immediate).

Asian American studies, however, was never meant to only provide critical and historical analyses of the power structures that shape our lives. It was meant to provide knowledge for social transformation; to provide us with tools for challenging the system. Asian American studies offers us education for us, by us, and not for the corporations that have too much control over higher education and that you’re likely to have to work for to pay off your debts, ironically, after you graduate. Asian American studies has been documenting our stories and speaking truth to power for decades well before #MyAsianAmericanStory became the phenomenon it has become today. Though #MyAsianAmericanStory is a worthy endeavor it doesn’t really give us the tools for understanding why our stories have been suppressed to begin with. Asian American studies does.

3. It gives us a longer historical sense of who our “friends” are. Social media can definitely be credited for making us more aware of issues taking place beyond our everyday realities and to weigh in on issues even if we don’t think of ourselves as activists. With a simple “like,” “follow,” or “share” we can participate in some way, however modest, in expressing disgust for injustices or support for social justice causes. Take #BlackLivesMatter. The hashtag took the Internet by storm and has had very real, off-line impacts (and vice versa). Many Asian Americans joined in. However, many other Asian Americans seemed troubled that Asian Americans were amongst those visibly taking a stand. They seemed to think that Asian Americans taking a stand with #BlackLivesMatter were somehow forsaking their own communities. They’re totally wrong. One of the important lessons you learn in Asian American studies is that in earlier moments, African Amerians made – in today’s terms – #asianlivesmatter. Another way of thinking about it is Asian Americans’ “friendship history” with African Americans is over a century long. During historical periods when the U.S. imperial police state perpetrated violence on Asian people, African Americans stood up side by side—in solidarity—with Asians in their resistance struggles. In 1898, the United States decided to position itself as a world power and seized control of the Philippines, Puerto Rico and Cuba from the declining Spanish empire at the conclusion of the Spanish-American War. Though the United States has its anti-colonial history, having waged revolution against England, it replaced Spain as a colonizer over the Filipino, Puerto Rican and Cuban people. In fact, American leaders backstabbed Filipino anti-colonial revolutionaries. They promised Filipinos that they would support their fight against the Spanish. Filipinos took up arms against their false friends giving rise to the Filipino-American War. The United States sent troops to the Philippines to suppress the so-called “rebellion.” Among those troops were African Americans who served in segregated units. Black soldiers realized soon enough that they shared common cause with Filipino guerillas who their white counterparts referred to as “n______s.”

African American army corporal David Fagin actually abandoned the U.S. military, joined Filipinos and became a guerilla leader. Meanwhile back at home, African Americans were among the most vocal anti-imperialists, decrying the colonization of the Philippines and the atrocities committed against Filipinos by the American military (including the torture technique invented during the Filipino-American war: water-boarding). Decades later, world-famous boxing champion Muhammad Ali would similarly take a stand against U.S. imperialist incursions in Asia at the height of the Cold War. He objected to being drafted during the Vietnam War stating, “Why should they ask me to put on a uniform and go 10,000 miles from home and drop bombs and bullets on Brown people in Vietnam while so-called Negro people in Louisville are treated like dogs and denied simple human rights? No I’m not going 10,000 miles from home to help murder and burn another poor nation simply to continue the domination of white slave masters of the darker people the world over.”

The prominent African American intellectual W.E.B. Dubois is often quoted as saying, “The probem of the twentieth century is the problem of the color-line” in describing how white supremacy is a

foundational logic organizing American society. However, in other places he in fact writes, “The problem of the twentieth century is the problem of the color-line—the relation of the darker to the lighter races of men in Asia and Africa, in America and the islands of the sea.” For DuBois, white supremacy is a struggle against which all people of color share common cause. This sense of common cause motivated the various groups that came together the Third World Liberation Front on the San Francisco State University campus.
The generations of students who have benefited from their struggle for Ethnic Studies, including Asian American studies, have cultivated this same sense of common cause and solidarity. They’re the ones taking a lead in supporting #BlackLivesMatter as this picture of some of my former students demonstrates (it’s the first image that pops up when you do a search of “Asian Americans and #BlackLivesMatter”).

The values that animated the Third World Liberation Front and that led to the creation of Asian American Studies are still very much needed today: interracial solidarity and a commitment to ending war and militarism. Do yourself a huge favor this academic year: take Asian American studies. Your life, whether you realize it or not, depends on it. 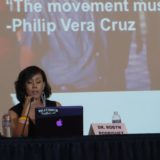 Dr. Rodriguez’s research is broadly concerned with understanding how processes of globalization, particularly international migration, impact the societies that migrants leave and the societies to which they move. She has explored these concerns with a particular focus on Philippine migrant workers in the U.S. and globally. Her research has appeared in numerous academic journals and she's spoken both nationally and internationally about her work. Rodriguez's book, Migrants for Export: How the Philippines Brokers Labor to the World (University of Minnesota Press, 2010), won an Honorable Mention for Best Book in Social Science by the Association for Asian American Studies.

Along with Dr. Pawan Dhingra, Rodriguez co-authored the textbook Asian American: Sociological and Interdisciplinary Perspectives (Polity Press, 2014). Most recently, Dr. Rodriguez has turned to examining questions of race, immigration and space in her soon to be published book, In Lady Liberty's Shadow: Race and Immigration in Post-9/11 New Jersey (under contract with Rutgers University Press).

Dr. Rodriguez is also a committed community advocate and has been standing up for the rights of Filipino immigrants for over 20 years. She has worked especially closely with the National Alliance for Filipino Concerns or NAFCON.

One reply on “Register for Asian American Studies, NOW.”