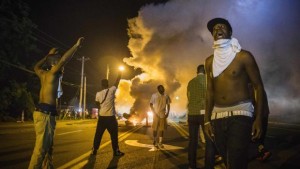 The shocking situation evolving in Ferguson, MO has laid bare an ugly feature of American life: that the relationship of American society to Black people is founded upon the logic of slavery.

Now, I know many of you will roll your eyes at that assertion. I get it. Slavery was abolished over 150 years ago, before anyone now living was born. But turn on your TV. Go online and read what has already happened in Ferguson. If there is some other logic guiding these events, it certainly isn’t apparent. No, the guiding logic here is operating below the surface, informed not by rational consideration but by history.

The logic of slavery, a concept I owe to Native American scholar, Andrea Smith, casts Black people as property whose only value can be measured in terms of dollars and cents. Under slavery, beyond their productive capacity, know-how, and worth as commodities, Black people had no perceived value to society and were therefore conferred no rights of citizenship. This is how “Black” was first conceived of in America.

Once slavery was abolished, the value of black workers to employers was exaggerated by legal exclusion, and  Black Codes that were quickly established throughout the South that criminalized Black vagrancy, unemployment, and even travel in some jurisdictions. Those who violated the Codes were committed to terms of forced servitude and often leased as neo-slaves to private industry. According to Douglas Blackmon (Slavery by Another Name), in just one state,

…Georgia in 1930, in excess of 8,000 men – nearly all of them black – worked in chain gangs in 116 counties. Of 1.1 million African Americans in the state that year, approximately half lived under the direct control and force of whites – unable to move or seek employment elsewhere under threat that doing so would lead to the dreaded chain gang.

I will note here, as an aside, that the fact that the threat of prison kept more than half a million Black people in just one state in the South under the direct control of whites made the situation of Blacks of that period, at least structurally, akin to that of undocumented Latino workers in the U.S. today, forced to accept substandard wages and working conditions because of the threat of deportation. The fight for immigration rights is an economic justice struggle in which all workers are stakeholders.

But Black Codes and convict leasing (and sharecropping, another highly exploitative system of the time that also took advantage of the subjugated legal status of Blacks), were eventually abolished. When these highly profitable systems of worker exploitation fell, the value of Black lives was decimated relative to the most elite white interests, and control of Black people began to be enforced in a manner that might have been considered reckless in the era of slavery. The dramatic rise of lynching in this period is evidence of this shift, as is the rise of white race riots and seemingly arbitrary assassinations of Black people in general.

The Civil Rights Movement attempted to rectify these wrongs and did so to a degree, but while failing to overcome resistance to addressing fundamental, racially unjust power dynamics. As Black people won protection of their rights of citizenship, the value of Black people to capital, as dictated by the logic of slavery, was further eroded. That logic didn’t simply dictate the treatment of Black people, it informed the structure of our economy, including expectations of profit that could only be supported via super-exploitation.

That the war on drugs and tough on crime policy would be popularized in this same period is no coincidence. These racially targeted law enforcement regimes disrupted the Black Power and Civil Rights Movements, both of which threatened to evolve into movements for more substantive, structural reforms. Dissent in segregated, low-income Black communities was contained and criminalized. Millions of poor Black people now out of work or only marginally employed fell to these law enforcement regimes and were warehoused in prisons and jails, often for economically motivated offenses.

The clumsiness of law enforcement officials and certain elected leaders in Ferguson is magnifying an enduring problem of our society, hopefully to the point where more of us are seeing it with greater clarity. Our collective perception of the value of poor Black people in America continues to be dictated in no small part by the logic of slavery. According to that logic, Black lives don’t matter unless they matter to “we the people.” And, as in history, “we the people” is informed by interests that are decidedly not Black.

Absent a willingness to address Black communities as though Black lives matter, we instead attempt to push poor Black people into the margins of society. But we cannot win racial justice unless we address the centrality of the force of anti-blackness in the perpetuation of racial inequality.

White supremacy is nothing more than racialized anti-democracy. If we can’t break with the logics that inform it, we will all be its victims.

5 replies on “Michael Brown, Ferguson, and the Logic of Slavery”

A very important question is, how will the murder of Michael Brown galvanize citizens? Furthermore what are the implications of realizing the very real fact that within our society a free unarmed citizen can be stopped, gunned down and murdered in the streets of America by an officer of the “Law”. Will this criminal act of violence be a call to citizens throughout the nation that our government and the system of laws we are under no longer and possibly have never served our true interest? Citizens may begin to ask, how did such a environment come into existence. Revolution may be required.
Read more at http://damonbell.info/blog_post_0274.php#hRlYSmO7TZBeyZQm.99

[…] trace this history, we could go back to slavery and the subsequent failure of post-Civil War reconstruction to secure economic and political […]