Education. More sophisticated work. Higher pay. This is the development formula Mexico has been seeking for decades….Here, in a mostly poor state long known as one of the country’s main sources of illegal immigrants to the United States, a new Mexico has begun to emerge. Dozens of foreign companies are investing, filling in new industrial parks along the highways. Middle-class housing is popping up in former watermelon fields…signaling a growing confidence in Mexico’s economic future and what many see as the imported meritocracy of international business. In a country where connections and corruption are still common tools of enrichment, many people here are beginning to believe they can get ahead through study and hard work.

From “In the Middle of Mexico, a Middle Class Is Rising,” by Damien Cave (New York Times, November 18, 2013

…Mexico has another shot. If the country of 112 million people can harness the energy of foreigners and newly educated Mexicans, become partners with the slew of American firms seeking alternatives to China, and get them to do more than just hire cheap labor, economists and officials say Mexico could finally become a more equal partner for the United States and the first-world country its presidents have promised for decades.

From “For Migrants, New Land of Opportunity Is Mexico,” by Damien Cave (New York Times, September 21, 2013)

In recent months, New York Times reporter Damien Cave has written two articles about Mexico as a “County at a Crossroads”. I could go on about the horrific centuries-long history between the U.S. and Mexico; how over a third of the land of the U.S. is the result of a bloody takeover from Mexico (not to mention the rest of the land being taken from Native Americans); about how the U.S. government and capitalists have consistently exploited braceros, using them to replace excluded or illegally detained Asian American workers during both WWI and WWII and reassert white supremacy and economic power; about the disgusting, dehumanizing narratives used to describe people, families, and children by xenophobic racists. But here I’m going to focus on neocolonialism, defined on Wikipedia as “the geopolitical practice of using capitalism, business globalization, and cultural imperialism to influence a country.” The neocolonial sentiment in the NY Times is clear: Mexico’s economic failures and “illegal” immigration are its sole responsibility, and its move to open its doors and labor force to multinational corporations is clearly a move towards progress. In reality, the Democratic Underground said it best: “NAFTA has made unauthorized border crossings much worse as the Mexican Corn Refugees stream across the border so they can afford to EAT.”

NAFTA, like most free trade agreements, is nothing remotely close to free. This policy singlehandedly destroyed the rural economy in Mexico and the lives of millions of regular working people. 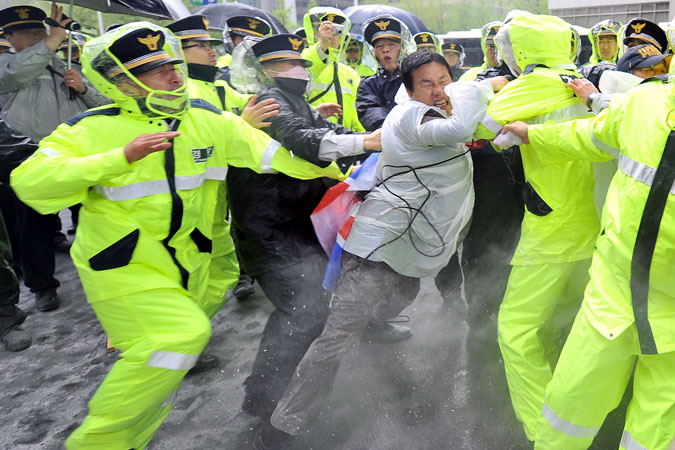 In 2007, I went to visit family in rural South Korea to explore the real life impact of the Korean-U.S. free trade agreement (KORUS-FTA) which had passed just 2 months earlier. I got to interview my uncles and aunts, distant cousins and other people from the area my parents are from about the impact of the new policy. The economic and cultural consequences were immediate. One cousin had 7 years to go to pay back debts for cattle he had purchased, only to have the Korean market flooded with cheap American beef just a few years in as a result of one KORUS FTA stipulation in which South Korea would ultimately reduce its 40% tariff on U.S. beef.

Another cousin later explained how popular American beef had become for the Korean middle class (obviously they haven’t seen any of the documentaries about the horrors of the U.S. livestock industry), and I saw the pro-American advertisements myself. Chicken farmers, rice farmers, potato farmers, all of them talked about the sudden change in prices they could get for their goods. My cousin’s children were excited to learn that the distribution of American media, like Hollywood blockbusters, would be on expedited release schedules in Korea. Meanwhile, everywhere I went, small farmers demonstrated on the streets with banners and megaphones.

Let’s piece these things together. In this particular so-called “free trade agreement,” Korea loses hundreds of thousands of jobs, its market is pummeled by U.S. exports (spheres of influence, anyone?), thousands of farmers are put out of work (if they haven’t already been displaced by the construction of U.S. military bases and the coercive sex economies built around them), and millions of Korean youth get brainwashed by Hollywood’s racist, triumphalist mythology.

Please turn off the Kool-Aid faucet. Mexico is not a barren land waiting to be filled by “the imported meritocracy of international business”. Cave is pumping us full of the same mythology about the Mexican economy. When Cave talks about Mexican progress and “illegal immigrants” in the same breath the hype and hipocracy is clear.

One reply on “Exporting the American Dream: Thoughts on “Free” Trade Agreements”