I often hear political commentators and activists talk about how the Civil Rights Movement defanged overt racism as a politically and socially viable form of expression. Nowadays, folks claim, racists must speak in codes in order to mobilize white resentment.

I disagree. Yes, I get that things were once worse. I also agree that coded racism is a big problem. However, I don’t believe that overt racism is dead and buried. In fact, I think it’s making a comeback.

This picture appeared in a story in Jezebel criticizing the racism of these sorority members. Apparently higher education really does prepare students for leadership (in a society in which a significant minority of national elected leaders would spend billions to build a wall between the U.S. and Mexico before investing in shoring up dilapidated bridges along our interstate highway system).

Oh, and, yes, I did notice that there’s an Asian woman on the far left. I’m not going to hold her to a higher standard than her white friends, but I’m not calling her sister, either.

And then there’s the overt racism of certain political leaders. Take this for instance:

Marilyn Davenport is responsible for circulating this example of overt racism. Ms. Davenport is an elected member of the of the Republican Party central committee of Orange County. The photo was circulated with the caption “Now you know why – no birth certificate!” Of course, she insists, it was just a joke, a defense I interpret as her way of making sure we know she thinks racism is hilarious.

And then there’s the controversy over the Stanford University mascot. From 1930-1972, the mascot was the “Indian” commonly caricatured as a small man with a very big nose. For 19 of the years that the “Indian” was the Stanford mascot, a man named Tim Williams (aka Prince Lightfoot) performed as the mascot in what Native Americans objected to as a parody of native religious rituals.

Good for them. In 1972, the Stanford Indian was retired.

Nope. The controversy over the change in mascots wages on, as represented by these pictures taken by a Native American Stanford alum at a recent Stanford reunion weekend: 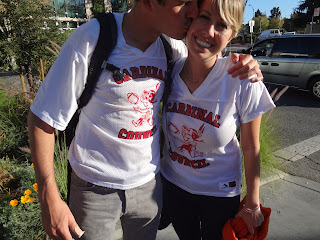 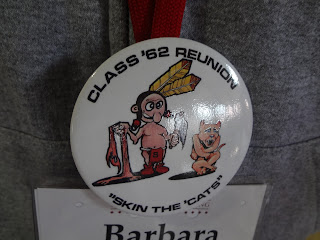 The Cardinal Council referenced on those t-shirts in the Stanford alumnae council so I’m guessing nostalgia for the “Indian” is pretty mainstream. Messed up, right? But there’s more. I recently blogged about this example of hipster racism:

This t-shirt is being sold, in 2012 mind you, by Baker Skateboards, a popular national retailer of skateboards, skating accessories, and clothes. Their reaction to being called on this? Basically, that in the skating world, something someone as ancient as me couldn’t possibly fathom, this is a joke.

I’ll give them their position that humor is context driven. Like, for instance, I’m guessing this joke would go over like a lead balloon at a Japanese American Citizens League dinner, but I’m pretty sure it would be a real winner at a Klan rally. And as the Klan has definitely been a much more popular organization over the course of American history, I assume they mean to stay on the side of what’s generally been popular, being a retail business and all.

Now, I know some of you will tell me that overt racism never really went away. Agreed. I also agree that coded racism is a very big, and perhaps bigger, problem, at least in terms of shaping public policy. But my concern is that overt racism has always played an important role in perpetuating racial inequity. And, that so much of contemporary overt racism is couched in humor makes it that much more insidious.

Finally, to those who think that only marginal types practice overt racism, the images above should serve as a wake up call. They are the expressions of a sorority at a major university, a GOP leader in one of the wealthiest counties in the U.S., the alumnae of an elite college, and a successful retailer marketing products to young people.

One reply on “We’re Not Over Overt Racism”

Good (and depressing) examples, Scot. And just read the comments in any online article that discusses either immigrants or the president. In the privacy of their homes, and with anonymous online names, people feel free to express their innermost anti-practically-everyone-but-them-but-especially-people-of-color thoughts. It’s impossible to read these and still conclude that the country is getting better.