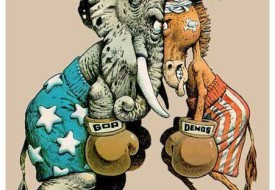 Lately, the debate over who is more racist, the Democratic Party or the Republican Party, has heated up, with accusations flying from both sides. The discussion really got going when Chris Hayes, host of MSNBC’s Up with Chris Hayes, said of Republicans, “It is undeniably the case that racist Americans are almost entirely in one […]

Today President Obama acted by directive to provide a 2 year “deferred action” on deportation of undocumented immigrants who were brought to the U.S. as children. I’m overjoyed at the change. But am I grateful? Nope. I say it’s about time and, BTW, not enough. No doubt the directive was prompted by the fact that […]