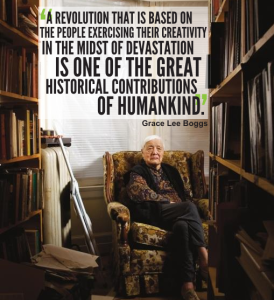 At the second presidential debate, after a weekend of scandalous news, Donald Trump spent the night flicking shit at the pundit class in order to create a distraction. The pundits duly responded, and…you know how this goes from here.

Don’t let the scandals distract you. This election should be understood in a much broader, world historical context: We are in a time when old norms are falling and new ones are being established, and through a multidimensional fight in which all sides appear to be attacking the middle.

The right wing has gone off the rails. Years of attacking liberalism, an assault hardened and given an even more explicitly racial meaning after President Obama’s election, have helped to facilitate this, for sure. But there’s so much more to this story than the extraordinary polarization between Democrats and Republicans and what the effects of this extreme polarization have been on the electorate (and I’m not trying to minimize those effects which are many and may lead to violence, in fact have done so already).

All of this matters, but they are mainly effects, not the cause of the current chaos, just as Trump is more the buffoonish effect than the sudden cause of destructive white racial radicalism in the GOP, to paraphrase a wise acquaintance.

Liberalism is under attack. Neoliberalism, not an aberration but rather an exaggeration of liberalism, has caused ‘liberal’ to become synonymous with ‘elite’ while also weakening government.

Neoliberalism is driving financial deregulation, austerity, privatization, and economic stagnation for the bottom 90 percent. And neoliberalism has also put government on a starvation diet, causing the public sector to grow increasingly unresponsive, breeding resentment and fueling a vicious cycle.

Neoliberalism is the logic of late capitalism, a system that must constantly grow or die, attempting to expand markets through deregulation and privatization.

But, the thing is, capitalism needs government. The driving logic of capitalism is capital accumulation and growth, not capital redistribution for the sake of community sustainability and work force viability. Yet, redistribution in the form of public works and programs is a bulwark against rebellion, prepares and sustains a ready and capable workforce, and ensures worker productivity, and robust markets for consumer goods and services.

Capitalism relies on public infrastructure, public sector employment, and public assistance programs. Government spending on all of the above amounts to subsidies to business financed disproportionately by the taxes of the ordinary wage earners who make the products and provide the services that generate business profits.

But all of this is being chipped away even as the future appears increasingly challenging. Without “big government” will capitalism survive extreme advances in automation resulting in massive unemployment? In a recent gathering sponsored by my firm, ChangeLab, two of the world’s leading technologists warned of 50+ percent unemployment across blue collar and white collar sectors within 20 years, prompting one of them to comment, “That’s revolution time, right?”…