Chinese Americans across the country are planning to rally on April 26 in defense of Peter Liang. The rookie New York Police Department officer fatally shot Akai Gurley in a stairwell of the Louis H. Pink Houses housing project in Brooklyn on November 20, 2014. Gurley, 28, was unarmed at the time.

The thinking that has propelled these actions is the idea that Liang has not been given a fair shake by the criminal justice system. Liang’s backers maintain that he is being used as a “scapegoat” by prosecutors because of his Asian ancestry. They claim that Liang has suffered harsher scrutiny as compared to white officers in similar situations.

Liang’s champions rightly question the fact that Darren Wilson, Daniel Pantaleo, Michael Slager and countless other white police officers have literally gotten away with the murders of African American men, women, and children. Yet their critiques are also strangely misdirected. Notably, the root of their concern is in fact the same as the position taken by such groups as Committee Against Anti-Asian Violence (CAAAV) and #Asians4BlackLives (both of which have called for #JusticeForAkaiGurley): that white privilege, and racism more broadly, is wrong.

If we begin from the premise that racism is unacceptable, then it does not make sense for Chinese Americans to rush to the defense of Officer Liang simply because he is a fellow Chinese.

It’s worth noting that ethnic Chinese in the United States have never operated on this logic—that is, the assumption of “natural” affinities among one another. In actuality, Chinese immigrant communities have long been riven by heated if not bitter class conflicts and philsophical disagreements. Early arrivals from China in the mid-19th century did not necessarily even consider themselves “Chinese.” Many were more likely to associate with others from their home counties (such as Taishan) or their extended “clans” (persons sharing the same surname).

In the 20th century, Chinese American politics continued to be messy and complicated. Individuals and organizations parted ways over China politics and US Cold War foreign policy, especially the high-stakes question of supporting the Nationalist/Kuomintang party, Chinese Communist party, or the anti-Nationalist, anti-Communist “Third Force” after the birth of the People’s Republic of China in 1949. But as American society became more open to Chinese after World War II, Chinese in the United States gradually refocused their attention on domestic issues such as civil rights, immigration policy, and affirmative action. As before, they did not speak with a unified voice; many joined the Democratic Party, some gravitated toward Republicans, and still others rejected electoral politics altogether in favor of radical, leftist grassroots activism. Today, Chinese Americans can be found on all points of the ideological spectrum, as the Liang debate vividly illustrates. There are no “natural” affinities.

What, then, ties Chinese in the United States together, if anything, if we acknowledge the large sweep of diversity past and present? What basis do we have for productive unity? And what implication do these connections—if they exist—have for Chinese American politics going forward?

What all Chinese Americans share is the reality of living in a society shaped by the deeply-entrenched forces of white supremacy. These forces—laws, beliefs, widespread patterns of activity, and everyday face-to-face interaction—have operated for centuries to the benefit of whites at the expense of others, including Chinese. While the particulars and the individuals involved have changed over time, the results have been consistent. In the late 19th century, West Coast nativists pressured Congress to pass the Chinese Exclusion Acts. This legislation—buttressed by anti-Chinese hostility and violence in the media and by local and state segregation measures—intended to deny workers from China and their children not only the rights to enter the United States but also any meaningful and dignified participation in American life.

In the early 21st century, ordinary citizens, policy makers, and law enforcement collude to withhold from black people the ability to walk down the street safely without fear of being targeted and killed. Again, the outcome is to deny African Americans such as Akai Gurley meaningful and dignified participation in American life.

As April 26 approaches, I urge all Chinese Americans to broaden our views to encompass the longer history of race and racism in our country. We share this history not only with one other but also with African Americans. We have the power to shape its future trajectory for the common good. And that begins with the critical acknowledgement that Black Lives Matter, not just to black people, but to all people. 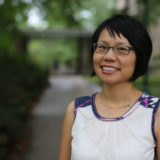 3 replies on “When Being Chinese Is Not Enough: Peter Liang and the Future of Ethnic Solidarity”

I’m curious to know what took place at the April 26 rally since I’m reading this article after it took place.

I’d say that Chinese activists are treading on shaky ground. There’s little cohesiveness when you consider that some view discrimination through a rather short sighted view that excludes anyone who isn’t Chinese (yes, I’m assuming they’re excluding other Asian ethnic groups in addition to non Asian people of color), while others have a more inclusive understanding of human civil rights.

Sadly enough, there will be people who say “Well, justice should be done for me, but not for others” having their opinions shaped by personal experience which is itself often influenced by personal bias and/or mistrust.

It’s wrong to take such a narrow stance regarding racial inequality. Indeed whites view all of us as different. For centuries they have benefited from a system that has marginalized people of color, it also serves their interest to have groups advocating racial justice constantly at odds with one another.

As I’ve mentioned in various other posts, people should look for a common history. Asians as a whole have been denied the same rights and privileges that whites take for granted. Asians on the West Coast were denied citizenship and the right to purchase land, and the number of women allowed to enter the US was drastically limited in order to keep the population at a minimum.

Blacks have been denied voting rights, housing rights and their very humanity. Non white Hispanics and American Indians have also been and continue to be mistreated in the US.

People of color must look at the larger picture and realize that we gain nothing from fighting amongst ourselves. We are better served by helping one another and calling out racial discrimination wherever we see it and backing one another in the fight for racial justice.

[…] When Being Chinese Is Not Enough: Peter Liang and the Future of Ethnic Solidarity […]

[…] against surveillance, against any narrative of assimilation. As Ellen Wu has stated, being Chinese American is not enough. Being and seeing more Asian Americans should not be […]