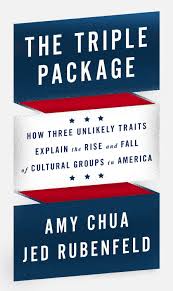 The controversy generated by Amy Chua and Jed Rubenfeld’s new book The Triple Package is one of the more annoying non-news events of the year.  This past weekend alone, the book was covered by the New York Times in their Book Review insert and the widely read Sunday Magazine.

In spite of all of the exploitative but it’s not racist publicity that has landed the book so much free media exposure, The Triple Package isn’t about race. It’s focus instead is on the authors’ claim that what leads to certain measures of success in the U.S. is a “triple package” of personal traits, including a superiority complex, impulse control, and insecurity, that is supposedly manifest in certain “successful” minority cultural groups (including Rubenfeld’s and Chua’s own, btw).

However, the book deserves a critical review by racial justice advocates. Why? Because “research” like this that looks to individual character traits to explain broad social outcomes has the collateral effect, intentional or not, of supporting the post-racial but no less racist arguments of those who claim that black poverty, as one for instance, is rooted not in biological inferiority but in individual or cultural weakness, ignoring the impact of supposedly color blind contemporary public policies like the war on drugs, not to mention generations of racial terrorism, and racist codes.

So, in the interest of grounding us in some real world realities, here are two among a litany of reasons I think we need to get over the Rubenfeld-Chua hoohah and get our eyes back on the prize of promoting less anti-social definitions of success. Feel free to add your own gripes in the comments thread.

Reason 1: Attributing success to cultural characteristics is neither new nor novel. White people have been doing it for centuries. In fact, the idea of white cultural supremacy is one of the bases of the American culture and economy, not to mention one of the primary ways we’ve determined which personal traits would lead to American “success” throughout our shared history.

But whites aren’t the only ones who’ve played the culture card. Japanese American (JA) political leaders also made this claim about 60 years ago, a point made extremely well by Ellen D. Wu in The Color of Success: Asian Amercans and the Origins of the Model Minority. In her book, Wu recounts how JA leaders, still struggling against the anti-JA sentiment that led to mass internment during WWII, tried to win friends among middle class whites by promoting the idea that the community’s remarkable post-internment rise in social status resulted from admirable Japanese cultural traits.

That argument for Japanese cultural superiority has long been debunked. It cherry picks it’s way to a definition of “success” that ignores important contradictions, like the fact that while Japanese Americans had, by the 1960s, attained a higher level of academic achievement than whites, they nonetheless made less money, even in similar jobs, revealing that bias plays a role in who gets to experience success. That realization that might have helped to explain why certain other minority groups in this period weren’t experiencing a similar rise. Nonetheless, this trope became one of the tenets of model minority stereotyping and contributed to the craze for all things Japanese during the U.S.-Japan auto wars of the 1980s.

In the 80s, the apparent overnight success of the Japanese auto industry made everything from reading The Book of Five Rings, by 17th century Japanese swordsman, Miyamoto Musashi, to copying the practice of some Japanese businesses of requiring factory workers to do group calisthenics, popular prescriptions for business success. Good thing U.S. auto manufacturers finally figured out that the Japanese were actually cutting into “their” market by simply building more fuel efficient cars.

Reason 2: Regardless of the “triple package,” it remains the case that the most powerful determinant of success in America today is the double package of one’s parents’ wealth and the neighborhood you grew up in, both realities too often dictated by race, not culture. If we’re trying to make a positive difference in the world we should focus there, and leave discussions of the relative value of insecurity, arrogance, and impulse control to the mental health industry.

So, let’s poo poo all the hoohah and move on.

6 replies on “The Rubenfeld-Chua Hoohah”

It seems more likely that the media hoohah over this is just over the idea that Chua’s ideas sound “mean” and “bigoted”. Does that matter? She could be those things, and still be right. And even if she wasn’t, it’s still a theory worth considering.

I’ve yet to see any reason why anyone should discount environment, background, culture, or biology when it comes to any outcome in life. Nearly all those opposed to biological determinism does so on the grounds of angry, defensive moral outrage, including the scholars who publish against such notions.

The idea that all people are inherently equal, or should be equal, is an ailment that plagues the White left. Asians should not believe in such rigid dogma, nor be shamed into agreement simply because the alternative is too prejudiced to consider.

I really don’t care if Amy Chua is mean or bigoted. To me, Amy Chua isn’t the problem. The problem is that we invest too much in the kind of social theory that posits “success” or “failure” as being the result of personal characteristics, and that’s something we have been doing as a society for a long time now. The whole enlightenment experiment in the U.S. is based on this thinking, yet we have never been able to escape patterns of success and poverty that, upon examination, almost always have historical roots in our politics. I’m not suggesting they shouldn’t say whatever they want. I’m suggesting that it’s a waste of time for the rest of us to pay so much attention to it.

That’s right. Amy Chua is not the problem, she is only a symptom of the problem, white supremacy. Her behavior is kind of like her reaction to having internalized large amounts of racism (white supremacy). Her being married to a white man, Rubenfeld, is probably only enhancing and further encouraging that behavior. I wouldn’t doubt Rubenfeld (or other white people she associates with) is feeding her ego trip. Rubenfeld is definitely practicing refined racism with the inclusion of non-white groups in the book, trying to smoke screen his racism. I say reserve the harshest blame and criticism for white people (Rubenfeld in this case).

myoung, are you a white person? You must be a white person. You sound like a white supremacist. Your comment fits the same pattern (blaming the “White left”, biological determinism and so on). White people are the ones who have the most invested in that “theory”. That is exactly the problem, you making the suggestion that Asians should boldly join in and support that idea that has only served to benefit the system of white supremacy.
“Biological determinism”, another codeword for white supremacy.

[…] more critiques of the book, check out this post by friend, Scot […]