When Renisha McBride’s killer looked on his porch on Nov. 2, he saw a threat, not a victim. The middle aged white man wielding a shotgun looked at the 19-year-old, Black, unarmed McBride and shot and killed her at point-blank range.

Would Theodore Wafer have shot McBride if she had been a 19-year-old white woman seeking help? We may never know. But we do know that Wafer’s perceptions of who and what constitutes danger are informed by a media culture that is increasingly controlled by people who don’t look like Renisha McBride or her community.

According to a 2013 Pew Research Center study, 71 percent of people reported getting their news from local television. This, despite what is painfully obvious to anyone who turns on the local news: racialized crime reporting, weather and sports dominate. As most who work for racial justice already know, this lopsided worldview – one that posits crime is everywhere and perpetrated by people of color – greatly impacts how society views crime and who commits crime.

Last week, Joe Torres of Free Press reported a sad milestone in U.S. media: There are now no Black owned and operated full-power TV stations in the country. This comes after media consolidation led to a steady decline of what was an already pitiful number of TV stations owned by people of color. Free Press reports the number of Black-owned stations went from 18 in 2006, to five in 2012 and in the last days of 2013, none. You might ask, why does this matter? TV is a wasteland of oppression, hegemony and capitalism, why is this an issue for those working against racism and for social justice? And besides, the internet has created space for more voices than ever – with a 2012 survey reporting 52% of U.S. bloggers are people of color.

True on both counts. But the lack of access to the means of production for both television and the internet (not to mention the hyper-consolidated radio airwaves) pushes already marginalized groups even further to the margins.

In a media ecosystem where only huge telecom companies get to decide what we see, hear and yes, think, voices of resistance and voices that speak from the margins are silenced. While merely being a Black TV station owner (or the African-American head of a movie empire) is no guarantee of advancing social justice values, we can be sure that the scions of Time Warner, News Corp, Viacom and Comcast have nothing but shareholder profits front of mind as they make programming decisions. Every once in a while, a rare progressive voice emerges for a bit, such as the brilliant and envelope-pushing W. Kamau Bell, before it is unceremoniously whisked off the air after being cavalierly shuffled between one News Corp property to another. This paradigm is a perversion of the trust given by the government to media companies: you get free access to the airwaves in exchange for creating content in the public good.

As for the blogosphere, the estimated 31 million bloggers in the United States add deep richness to the landscape of media diversity. There is a vibrant world of racial justice dialogue and debate online, offering critical race analysis and media criticism through a racial lens. Yet we cannot be complacent about our continued access to this platform either.

Behind the scenes, as we make our monthly tithes to our broadband overlords, telecom companies are working aggressively to roll back the modest progress made by advocates for an open internet. Unlike today, where we have generally equal access to the means of production (or at least the roughly 60 percent of us in the U.S. with home access to the internet), the telecom giants would like to pick and choose, as they do with the airwaves, what kind of content gets prime time access. So goodbye, Angry Asian Man, hello internet promo for Fox’s “Dads.” Farfetched? Not really. Media justice activists have long warned of the dangers of unregulated and unrestricted corporate control over the internet, of digital redlining and broadband throttling.

And amid this explosion of content is a hard reality. The vast majority of those creating content on the internet are not able to make money at it. According to the 2012 survey of 1,000 bloggers, 81 percent reported never having made $100 from blogging. So the practice of writing and creating content online must be squeezed in between a full-time job (either inside or outside the home). Consequently, the blogosphere is not often a source for evidence-based, primary research-based journalism. The kind that requires time, resources and, yes, financial investment to be viable. The ever shrinking world of news organizations still supply the bulk of the fodder for information in the public interest online, with a dearth of investigative journalism devoted to race or racial justice. As Pew put it:

“This adds up to a news industry that is more undermanned and unprepared to uncover stories, dig deep into emerging ones or to question information put into its hands.”

Too often, media outlets and online information gatherers unquestioningly reproduce work served up to them by professionals whose sole mission is to promote a product or an idea.

Those that do make money online do so appealing to the lowest common denominators: salacity, controversy, distraction and, of course, listicles. All of which do a fabulous job driving traffic, and therefore, money. This is bad news to marginalized communities that lack the numbers and power to demand access.

All this adds up to a dangerous world for the next Renisha McBride. With an increasingly consolidated media landscape, telecoms poised to limit the open internet and the precipitous decline in paid, journalistic newsgathering, there are fewer ways for the other  Theodore Wafers of the world to get a more accurate and complete understanding of the complexity of their community, so that next time they see Renisha McBride at their door, they will be moved to lend a hand, not pull a trigger.

Voices for Internet Freedom is hosting a town hall on Jan. 9 in Oakland to let FCC Chair Tom Wheeler know how FCC policies impact communities of color and low-income communities. 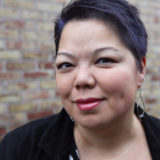 Naomi Ishisaka is longtime journalist and communications professional based in Seattle. She currently works in communications and does freelance writing, editing, photography and community work. For eight years, Naomi was the Editor in Chief of ColorsNW Magazine, a publication focused on race and communities of color in the Northwest. Prior to that she worked at several Puget Sound newspapers, including The Seattle Times and Seattle P-I. She majored in ethnic studies and journalism at The Evergreen State College. www.naomiishisaka.com