In the U.S. and worldwide, a hashtag devised by @SueyPark, #NotYourAsianSidekick was trending* since Sunday, prompting the largest scale–and most visible–public conversation related to Asian American/Pacific Islander/Native Hawai’ian** feminism I’ve seen in my lifetime. With the sheer volume of tweets (over 45,000 in less than 24 hours) and no real analysis conducted yet, I’ve only seen what has appeared on my timeline, the BBC, CNN, Buzzfeed and Slate articles that have emerged, and I’ve checked in with some of the fiercest feminists I know and have been digesting all the Twitter furor as best I can. 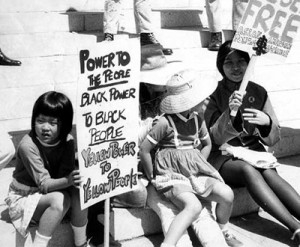 #NotYourAsianSidekick prompted the plainest of observations: APIAs require visibility and political power in a context that has rendered us invisible. That invisibility has been reproduced in the mainstream media, academic institutions, the workplace, and even so-called feminist or multiracial social justice spaces. Even the backlash, tweets, and trolls meant to undermine these thousands of voices are doing a great job reinforcing this need. For instance, comments made by so-called feminists of color about #NYAS that say APIAs are complaining about being told they’re good at math, or gross White supremacists including #asiantits in their tweets (seriously!!!), or the concerted effort to counter-trend #AsianPrivilege, attempted to derail the conversation by delivering the very racist configurations that made this conversation explode across the globe.

In asking fellow feminists of color to share their reactions to #NYAS, I discovered many shared themes, concerns, hopes. To quote Sukjong Hong, brilliant APIA artist, organizer, and writer, at length: “The hashtag conversation, overall, reflected very little of the working class and immigrant struggles and was a lot more about representation and identity politics. What I hope this conversation ignites is a movement away from talking only about representation and identity politics, i.e. in Hollywood, to one more centered in a critique of White supremacy, capitalism, and other oppressive ideologies. A feminism that fights for liberation for all. It doesn’t have to be either/or–fighting against sexual objectification and the model minority myth, while also fighting for fair wages and conditions for Asian/American women working in the service sector at nail salons and restaurants, and against gentrification and militarism, can be part of one movement.”

Similarly, Soya Jung, Senior Partner at Change Lab and fellow blogger on this site, asks us to consider the possibilities “for more visible Asian American resistance” that would pose a “demystifying and unapologetic challenge to ableist politics that are so often sidelined, denounce anti-black racism from an Asian American, feminist and anti-imperialist perspective.”

So what did the tens of thousands of Asian, Black, Latino, First Nations people and Whites (those of us who have access to the Internet and computers) see unfolding on their timelines? Many tweets called out the manipulative anti-black racism that valorizes Asians as “better than” Black Americans. Some called out patriarchy in Asia and Asian American communities, but some spoke about it as though it were a fundamentally distinct patriarchy than the kind we experience in a White supremacist context. Many tweets shared the sentiment that something is very wrong with the Model Minority Myth, but not as many highlighted why or how it’s a myth literally created to undermine the liberation of Black people in the U.S. Many talked about fetishization and desexualization, but few pointed to the colonial logics (parallel to that of Black women and men) that depend on these two poles, nor the direct relationship to U.S. military occupation of Asia, i.e. Vietnam, Korea, Okinawa, the Philippines. Many shared microinvalidations that cast APIAs as perpetual foreigners, but fewer spoke to the Obama administration’s accelerated deportation policy that devastates Asian and Latino families, freedom of movement and self-determination.

Jasmine Burnett, Black feminist and one of my favorite minds in reproductive justice, asked me some important questions in writing this blog and in general as an Asian American woman that I will close with: “The dialogue is stirring, now what do you want it to produce? How do you write from a proactive frame about what living a life where API women, queer folks and  human rights allies are acknowledged, respected and how must systems acquiesce with that plan?”

I’m a proponent of collective action framing and can’t answer that question alone. In the media coverage that followed #NYAS, the hashtag was being described as a movement. A movement must be organized and working towards a liberation for all of us whose lives, bodies, and histories are shaped and scarred by neocolonialism, dispossession of the land and sovereignty of indigenous peoples, European enslavement of African and other people from the global south, reproductive and sexual control, occupation, criminalization, assimilation towards Whiteness, capitalist greed, ableism, and the list goes on. What does liberation look like to you?

“If you have come here to help me, you are wasting our time. But if you have come because your liberation is bound up with mine, then let us work together.”
Lilla Watson, Australian Aboriginal Elder and Artist

*Note: Simultaneously trending with #NYAS, though not at quite the same volume, was #shutdownICE and #not1more. I initially wanted to write in a way that connected (or highlighted the disconnect between) these two trending topics and decided against it so as not to detract from the importance of the actions that were happening on both coasts yesterday. The brave youth, families, and community members, who, with their bodies, truths, will, and collective power, were literally laying it all down to stop deportations, the inhumane, savage criminalization of people, and the devastation of families on both coasts yesterday. At the time I was writing this, a tweet from @MikePrysner announced the arrival of armored trucks and whole line of LAPD vehicles arriving at the Los Angeles, CA action to disrupt peaceful dissent against Immigration and Customs Enforcement and the Obama administration.

**Note: I will be using AA/PI/NH interchangeably with other terms used to categorize this massive group and I understand how some may find this problematic as we move towards exposing the fallacy of an “Asian American” racial identity.

7 replies on “Not Your Asian [Insert Word Here]: Thoughts on Movement and Liberation”

Thank you for this! A much needed conversation

I don’t know if this is relevant to the conversation but I hope it might add a little reinforcement. I run the learning center of a community college’s inner city campus in a small Eastern city. We have a large population of Latino and West African immigrants. I see these people daily. They get up early in the morning to work at some minimum wage job then come to the learning center evenings, often to work on their education until we close. They work hard. They are embarrassingly polite and grateful for any help.They often must come with small children in tow (we have toys and coloring books) Anyone – ANYONE who says these people will not be assets to the community is just crazy or so bigoted they are stone blind. This is one elderly white man from a privileged background who looks at these new citizens and would-be citizens with enthusiasm and open arms. I love my students and am glad they have come. I learn from them. They will make us a better people. ICE MUST be stopped. It is making us look like Nazis!

[…] time, the impact spread beyond social activism circles. NYAS was covered not only on sites like Race Files and Angry Asian Man, but the tag trended so highly that Buzzfeed, the Washington Post and the BBC, […]

Man I really loved the pictures you used in this piece. I just thought they symbolized women coming together to end oppression of all forms and that no one’s struggle was more important than the other’s, but that in actuality our struggle is very much linked. I definitely hope we can reignite what our AMAZING predecessors have done, because we do come from a line of fighters. 🙂

When I was following #NYAS, an hour was dedicated to discussing issues of immigration. There were several issues discussed over the multiple hours, to the best of the mod’s abilities to direct a massive conversation. ICYMI.