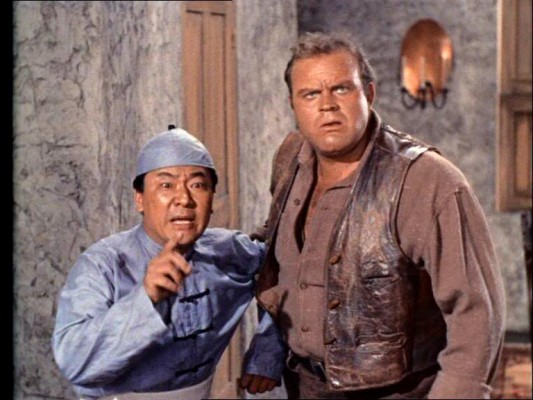 The controversy regarding Day Above Ground’s new song and video Asian Girlz has turned them into an internet sensation. Sigh. The video and song are based in the worst kind of juvenile, exploitative, dehumanizing sexism and racism. Worse, they’re selling it as a joke because, well, every body knows that racist exploitation is absolutely hilarious, right? That is, of course, unless you’re the brunt of the joke.

By the way, in case you think they’re alone in their idiocy, try doing a yahoo search of the term “Asian Girl” when you get to the end of this post. Go ahead, I dare you.

It’s pretty clear that a whole lot of people simply cannot resist the urge to reduce Asian women to exotic playthings. And men don’t have it much better. We continue to be as inscrutable to much of America as Hop Sing was to television audiences as he served “flied lice” to the Cartwright family on Bonanza in the 1960s. The stereotypes may have been updated, but they are just as widely believed and damaging.

Yet, our diversity defies stereotyping. There are 45 distinct ethnic groups speaking over one-hundred language dialects in Asian America. We vary in when we came and how we entered, with the first among us having arrived in the U.S. in the 19th century. Some came as migrant workers escaping poverty abroad. Others were recruited to fulfill American shortages of highly skilled workers. Still others came to America in order to escape war and political persecution. And even within our different generations and ethnic enclaves, each of us is different. There are 18 million ways of being Asian American and the variations are growing greater by number and diversity every day.

I grew up in the 1960s and ’70s having no idea I was Asian American. I understood myself to be a member of ethnic groups, cultures, a religious tradition, and a family. But Asian? I didn’t even attach my ethnic identity to “American.” But being cast as Asian American means that I eventually learned to accept the idea that I belong to the Asian race, even while simultaneously learning that race is just a political construct. Being Asian means calling myself by a name I was given in order to denigrate, exploit and exclude me, and even to justify wars against people who look like me.

There is no Asian language, ethnicity, culture, or tradition. There is no country called Asia from which my people hail. Asia wasn’t even invented by Asians. Yet being Asian American means that most non-Asians see me as a product of “Asia,” and not the product of a rural agricultural community in Hawai’i I never left until my early adolescence.

Being Asian American meant being passed from grade to grade throughout my school career, assumed to have more “potential” than my class performance indicated because of my Japanese surname. It meant finally realizing in high school that I’d been passed without actually learning what was necessary with such frequency that I knew less than was necessary to graduate. I’d spent years on a college track leading nowhere.

Being Asian in the 1980s meant accompanying a needy white family to the food stamps office in a rural Oregon town to help them apply for assistance, only to have the eligibility worker turn to the prospective recipient for language translation. And all while I was speaking English and the applicant was speaking Russian.

It also meant being blamed for the U.S. auto crisis in the 1980s by frat boys who pelted me with empty beer cans while calling me a “Jap” and yelling at me to “go home.” I was going home, to a basement apartment I lived in at the end of fraternity row.

Being Asian American still means having to bear rude, invasive, dehumanizing speculation concerning everything from my eyesight, to the size and shape of my brain and genitalia. It means being regarded as the other, as foreign, mysterious, and exotic. It means being profiled as a terrorist if you are South Asian, and rich if you are East Asian. It means being objectified as if you are no more  than a doll if you’re a woman, and emasculated by ridiculous stereotypes if you’re a man.

But regardless of all of these slights, I call myself Asian because being Asian American also means much more. It means being part of the fastest growing racial group in the U.S. We are 18 million and rising, part of a turning tide. In defiance of stereotypes we are increasingly more progressive with each generation. Being Asian American means standing on the precipice of change in America – a change we can be part of, if only we stand on the side of the color line that leans toward justice.

13 replies on “On Being Asian Girlz (and Boys)”

Good article growing up I have seen people of an Asian heritage be made fun of and singled out by some of my peers. As an adult I have heard some adults make comments about Asians that were quite racist. I am only sorry I did not speak out against such comments more when I had the opportunity.

As a young kid my mother had this female friend from work who was a first generation immigrant from China. Her friend invited my mother, my two siblings, and me to lunch one day. Well we got there and I am embarrassed to admit we three kids started pressing our eyes so they looked slanted and started saying “me Chinese, me drink Tea, if I please” or something along those lines and carrying on with a song that we heard other kids in school sing. My mothers friend became very upset and even started crying a little and got up and left. We all felt awful about it and my mother was so embarrassed. She never spoke to my mother again after that. I still feel bad about that and the few times I have teased others for being different when I was a kid. I was usually the kid who stuck up for those who were different and this trait has continued on into my adulthood. I am bothered by hate and don’t often hesitate to speak out against it when I hear it expressed. Being mercilessly teased in junior high I have felt the pains of teasing, bullying, hate, being ostracized and singled out, so when I see such it bothers me more then most.

I took the opportunity in high school to defend a kid at my high school who’s family was also from China, who used to be teased by others quite often. He was also short for his age and smart so he was picked on even more. I always took the time to tell others to shut up and stop being immature when they would start in. I was teased a lot in junior high so I knew what it was liked to be singled out. He became a friend and after he was at school for awhile almost everyone stopped the immature comments. There were some other times though when I did not stand up and speak out against racist and other kinds of hateful comments and I wished later I would have. The best thing we can do is speak out against such hate and bigotry. Such hate and bigotry will only continue if enough people condone it or let it be expressed unchallenged. Rather it is is directed at Asian, Latinos, gays, Muslims, or some other group we all should do our part to speak out against it. I think it helps those like us who have been on the other side of being teased, bullied, and harassed to realize why we should speak out against it. If we stay silent to hate it only grows.

Thanks for sharing your story.

No problem I thought it related to this story quite well the prejudice that exist in our society towards those with an Asian ancestry, that is not often discussed but ever bit as ugly as racism against blacks and Latinos or any other group.

I began watching that Asian Girlz video to see how bad it was. I had to shut it off. It made me sick.

Video is do racist and totally dehumanized Asian women.

“Being Asian means calling myself by a name I was given in order to denigrate, exploit and exclude me, and even to justify wars against people who look like me.” i think this part is especially apt. i’m realizing more and more how so much of asian stereotypes are directly the result of justifying the ongoing us imperialism in asia. yet i dont think asian american movement really deals too much with imperialism, even though that’s the source of the problem.

Yeah, I think activism as a whole is not good at addressing transnational and global geopolitics, something that everyone who identifies as a person of color should be examining.

I agree that dealing with imperialism is necessary, both because Orientalism, the roots of anti-Asian racism, was an ideology developed in order to support European imperialism and because it continues to inform our foreign policy with one result being that “Asian American” is a political construct in which a keystone is U.S. sponsored wars that have driven people from places like Korea, Vietnam, Laos, Cambodia, etc., into the U.S. Meanwhile, economic imperialism is making many into refugees of the global economy, unable to stay in resource exploited states and forced to migrate, with only the lucky and the most privileged having either the good fortune or financial wherewithal to reach places like the U.S. where they register in the minds of leaders of the global North as “immigrants.”

So, no feminist angle at all?

I wrote two posts about that video. The second one went up on Monday, August 5. Would love for you to read it and add your perspective to the comments thread. Always hoping to learn and appreciate comments because they are often as widely read as the posts themselves. Thanks.

I dare to watch that piece of artistic garbage that to me is the equivalence of black-face. That is what I hate about some white guys that are indifferent or insensitive to others. They went and took all or most of the stereotypical beliefs and put them all in a song. This I compare to the Waynans “Scary movies” not to put down the Waynans and their collage of movie spoofs. This was a collage of ignorance. I happen to love Asian culture and the people, I know that every race has negativity in it, some more than others, but I try to keep it positive. I hope that group is not trying to win a Grammy, maybe a Razzberry. Their video SUCKS.