Hallelujah! Rick Santorum is finally out of the Republican primary race! What, you didn’t think I would feel that way?

I’ve been listening to liberal media pundits talk about the unlikely prospect of Rick Santorum winning the Republican presidential nomination as if it would be a “gift” to Democrats all season. Some liberals have even turned out Democrats to vote for Santorum in open primaries. And now, some of them are talking like they’re actually a little sad that he dropped out, boohooing over how good it was for Democrats to have him in the race.

I say they’re nuts. As conservative and elitist as Mitt Romney is, he’s not a right winger. He may be pandering to the right wing, but he doesn’t belong to that movement. He’s neither a theocrat nor a libertarian, and, while it is true that Mormons once believed that Black people are cursed by God, Romney is not an ideological white supremacist.

As much as I disagree with Mitt Romney, I do not by any means consider Santorum a “gift.” Misogyny, and racial fear and loathing are powerful motivators.  In the end, I’m not at all certain Santorum would have lost (which we should keep in mind since he seems to be hoping for another chance in 2016).

But if that’s not enough to get you feeling grateful that all we got was Mr. Etch-A-Sketch, allow me to tell you a little story about Barry Goldwater, aka Mr. Conservative, and the impact he had on all of us by running for president and not just losing, but getting his ass handed to him. 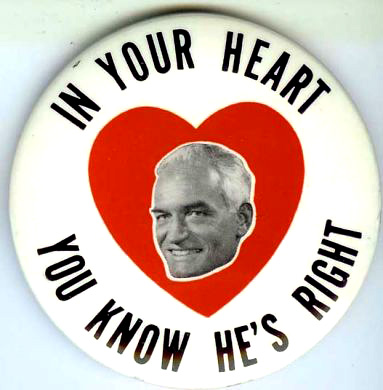 Johnson’s ass-kicking of Barry Goldwater in 1964 appeared to signal the end of racial conservatism in national politics. Sadly, it ended up being a new beginning. With Goldwater’s campaign lists of highly motivated anti-civil rights voters serving as a resource, and his strategy of appealing to racism to win white Southern votes as a template, libertarian economic elites began to build the Republican’s Southern Strategy.

Goldwater exposed the power of racism as a political tool by running against Civil Rights and winning big among white Southern voters, including Democrats who jumped the fence in order to support him. He ran on a platform of turning Social Security into a voluntary program, and eliminating farm subsidies among other schemes that were very unpopular in the South, much as limiting access to birth control is a very unpopular position today. But, because he ran against Civil Rights, he won Southern votes, even from white people for whom the programs he promised to destroy were the most popular.

Goldwater’s strategy turned race into a partisan issue. In 1962, a national poll asked which party would more likely ensure Blacks got fair treatment in housing and employment.  22.7% answered Democrat compared to 21.3% who said Republican. 55.9% said there was no difference. By late 1964, another poll showed that 60% of those questioned said Democrats were more likely to ensure fairness and 7% said Republicans, with only 33% seeing no difference. Such was the suddenness and force of the backlash strategy.

In the 1950s, poor white Southerners were the third most liberal voters on issues of government intervention for full-employment, education, and affordable health care, right behind Blacks and Jews. By the early 70s, they did a values flip. When it came to poverty alleviation programs, they went from being liberals to being statistically indistinguishable from wealthy white Northerners, the traditional base of the GOP. Given the ongoing poverty of the South, this move was akin to poor white Southerners cutting off their toes for want of smaller shoes.

The Republicans, smelling blood, went about breaking the class basis of the New Deal Coalition by appealing to racism. In a pattern that would repeat itself throughout the South, GOP voter rolls shot up from 49% to 76% in Birmingham, Alabama’s poorest white communities between 1960 and 1964. In Macon, Georgia, it went from 36% to 71%. Atlanta went from 36% to 58%, and so on.

The current Tea Party protest language against government spending started out as coded language designed to build opposition to Civil Rights. Anymore, most aren’t even conscious of it. They just use the language and achieve the effect of mobilizing race sensitive whites who, themselves, often don’t understand they are responding to calls to racism: it’s just part of the political culture now.

So you think Rick Santorum is a gift to Democrats? Consider the legacy of Barry Goldwater and think again.

BTW: Credit is due to Thomas Byrne Edsall and Mary D. Edsall for some of the stats above. I’m not sure I agree with all of the political conclusions they draw, but they do good research!

2 replies on “Why I Rooted For Mitt, Or Rick Santorum Is A Danger…Still”

Totally agree, Scot. Santorum terrified me, and any people on the left or even leaning that way who thought about playing cute games in the primary need to get out more often. Santorum has a HUGE constituency. I think he could have carried Clallam County, in the blue state I live in. On the other hand, I’m not much less horrified by Romney. It’s like a choice between Handmaid’s Tale and Brazil.