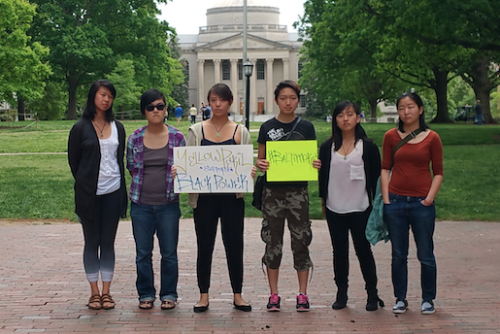 Media stories about clashes between Asians and Blacks during the ongoing uprising in Baltimore, Maryland have been getting a lot of attention over the last week or so. There was this one on NPR, that at least attempted to offer a balanced view, and this one in the Daily Beast that, not surprisingly, didn’t. In the end, most of the coverage is incomplete, and more designed to drive page views than provide real news.

Jeff Yang did a great job of taking this trend down on the CNN site. You should read the article. But there’s more to this story that deserves some consideration.

What these stories also fail to tell us is that Asian-owned businesses in Black neighborhoods usually operate without incident, a situation that suggests the owners have professional or even cordial relations with their neighbors. If they didn’t, they wouldn’t be viable enterprises. But that’s business as usual, and stories about business as usual don’t drive page views.

Also in the category of business as usual is the ongoing neglect of primarily Black, low-income urban neighborhoods, and the day-to-day harassment of low-income Black people in these neighborhoods by police. We only cover that kind of harassment when it ends in death, which happens a lot, but not in most of the cases in which Black people are unjustly mistreated. This kind of business as usual for low-income Black people, should be newsworthy, or at least it would be if mainstream news outlets actually thought of Black people (and Asians, btw) as an important part of the audience they are serving. Sadly, they obviously don’t.

But, there’s even more. If you look closely at live television news feeds, you’ll see that there are a fair number of Asian Americans among the protestors. Some of those Asian Americans are getting arrested for acts of civil disobedience alongside African Americans.

I call that remarkable in a city that is 2.6 percent Asian according to the most recent census. Remarkable maybe, but, apparently, not sensational enough to inspire the kind of rubber necking mainstream media thrives on.

By sensationalizing Black-Asian tensions (and isolating these tensions from the tensions between Blacks and whites, whites and Asians, Asians and Latinos, Native Americans and settlers, etc.) while also ignoring the context for them, the media also heightens those very same tensions. They heighten tensions by extrapolating from these isolated incidents to the attitudes of whole communities. Doing that causes us to anticipate tension. Anticipating tension, in turn, tends to cause those tensions to rise.

But, worse of all, these stories of tensions between Blacks and Asian are often, even usually, anti-Black. That’s right. I said anti-Black, as in racist, even if maybe unintentionally.

They nearly always cast innocent Asian strivers as victims of Black rage gone wild, expressing itself in ways that appear savagely selfish, irrational, and driven by bigotry that has little if any basis in logic. By doing so, they feed a very old and very negative stereotype.

That stereotype is just that, a stereotype. But, it is, nonetheless, one of the popular justifications for mass incarceration and criminal profiling, and informs the kind of thinking that is driving the extraordinary number of incidents of brutality and death of Black people at the hands of police officers in the first place.

21 Responses to When Blacks and Asians Clash